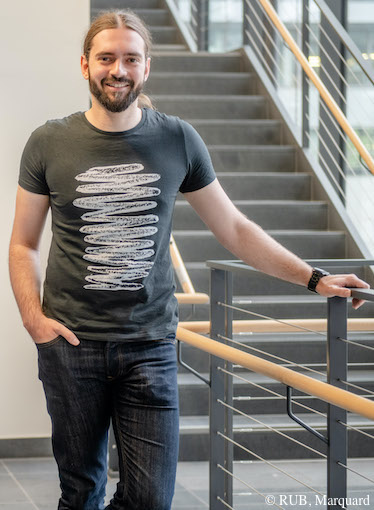 Consultation hours: by appointment only
Inquiries not sent from official university email addresses will probably be ignored.

Steffen Bondorf is the Professor of distributed and networked systems in the Faculty of Computer Science at Ruhr University Bochum, Germany. His main research interests are in performance modeling and analysis of determinsitic networking, in particular, using network calculus.
Steffen studied computer science at TU Kaiserslautern (TUK), Germany. He was the first student who enrolled into a B.Sc. program at TUK before finishing secondary education. Subsequently, Steffen received his B.Sc., M.Sc. and Dr.-Ing. (equivalent to Ph.D.) in Computer Science from TUK, where he was part of the distributed computer systems lab.
After graduation, Steffen was a postdoctoral researcher, lecturer and Carl-Zeiss Fellow in the Dept. of Computer Science at TUK, a research fellow in the School of Computing at the National University of Singapore as well as visiting researcher in the Dept. of Electrical and Computer Engineering at the University of Toronto, Canada. From fall 2018 to fall 2019, Steffen was funded by an ERCIM (European Research Consortium for Informatics and Mathematics) Alain-Bensoussan fellowship to join the Dept. of Information Security and Communication Technology at NTNU Trondheim, Norway, and took a sojourn in the Kopernic group at INRIA Paris.
Steffen Bondorf was appointed as assistant professor at RUB on 01 October 2019, becoming the university's first hire in the joint tenure-track program of the federal and state governments for the promotion of young scientists. Since 01 December 2021, Steffen Bondorf is a tenured full professor.